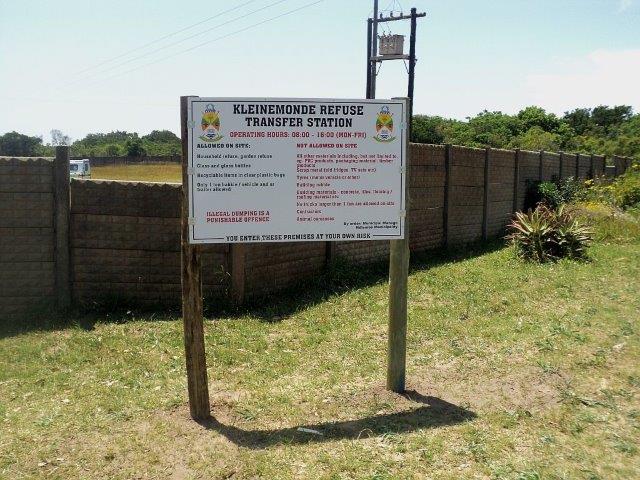 You have previously been advised that our refuse site will become a “Transfer Site” where only household refuse would be stored in skips for removal by the Municipality. By implication all other refuse – garden, builders’ rubble, scrap metal etc., – will be your responsibility to transport to the Port Alfred landfill site.

Because of the experience in other areas where refuse sites have been closed, it resulted in a sharp increase in illegal dumping on vacant stands, a service level agreement has been signed with the Ndlambe Municipality for the Kleinemonde Ratepayers Association, (KRRA) to manage the transfer site and allow limited type of refuse to be stored there.

KRRA will be paid R15 000 per month for managing the site.

On entering the road leading to the refuse site you will find the sign indicating that:

NOT ALLOWED ON SITE:
All other type of refuse
No contractors

A site supervisor, paid by the KRRA, has been appointed to manage the site.

His duties are to keep the site clean and tidy and to ensure that only allowed items are deposited at the site. If the Site Supervisor’s instructions are ignored he has the authority to report the matter to Ndlambe Municipality for further action to be taken.

The site will be operational, managed by the Site Supervisor, between 08H00 and 16H00 on weekdays.

It was, therefore, decided that outside of these hours (08H00 and 16H00, weekdays) that the site will remain open and rely on you to act responsibly and abide by the rules of what is allowed and what is not allowed.

The service level agreement has been signed for 6 months as a trail period. After this period it will be up for renewal depending on how successful the site has been managed by us.

The success of managing the site during this trail period will largely depend on all of us in abiding by the rules. If the agreement, after the trail period, is not extended due to mismanagement, the site will be closed altogether. The ball is thus squarely on our side of the court!!

There is a large amount of garden refuse which will have to be burned subject to the Manager: Fire & Emergency’s approval – weather condition and wind direction.

The intention is to start with a re-cycling program. This will entail placing all recyclable items (glass bottles, paper, plastic bottles etc.) in a clear bag for collection or for you to deliver to the refuses site. At the refuse site it will be separated and placed into different bulk bags for the different items and then be collected.

However, there are still some logistical problems to be resolve before such a program can be implemented.

Issued by the Kleinemonde Residents and Ratepayers Association