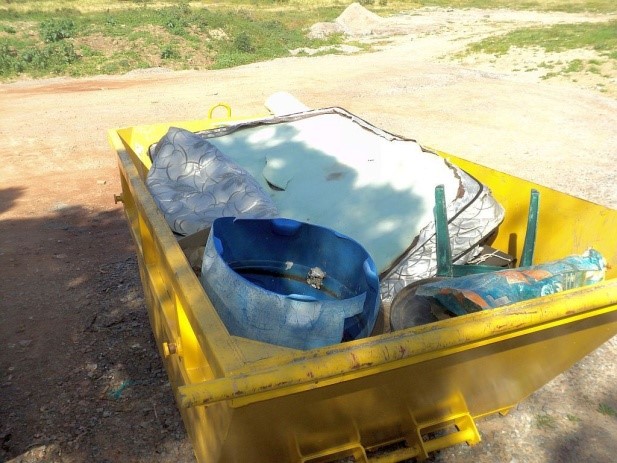 The use of the skips

The three skips at the refuse site are for household refuse contained in a plastic bag. Riet River, Kleinemonde West and Fish River Cottages all make use of these skips for their household refuse therefore space is limited.

A chip off the old block

To date we have been using a control burn to burn garden refuse at our site, which creates a problem because to do controlled burning we need at least two days of consecutive light south westerly winds – which you cannot order! Strong south westerly winds also rules out any burning due the risk of sparks being blown into the neighbouring farm.

The alternative to burning is to chip the garden refuse. Gary Pagel, now resident in Kleinemonde, has purchased a chipper, capable of chipping up to a 150 mm diameter log. As a trial run, Gary was contracted to chip an existing mount of garden refuse to determine costs and identify problems using this chipping service.

One problem encountered whilst chipping was that rubble is still being dumped together with garden refuse which then needs to be separated before chipping.

Thank you for the positive comments and encouragement received regarding the state of refuse site compared to the past.

We all share the responsibility of keeping it this way by strictly adhering to what is allowed on site:

The site cannot be monitored 24/7 to stop illegal dumping of refuse – we trust all of you to act responsibly – after all Kleinemonde is OUR home.